9GAG And VFX Creators Team Up to Protect The One Ring

HONG KONG, Oct. 11, 2022 /PRNewswire/ — Popular mobile strategy game “The Lord of the Rings: Rise to War”, based on the trilogy of books by J.R.R. Tolkien, provides gamers with much in-game action to fight for the One Ring and the control of Middle Earth. But things get even more heated in this universe.

In its first creator-driven initiative, “The Lord of the Rings: Rise to War” recently teams up with three world-famous digital content creators and the global entertainment brand 9GAG to produce an immersive video series that blends gameplay recreation, real-life action and a marvel of special effects.

The series has received over 33 million views and 35 million impressions across 9GAG’s social media channels in just two weeks.

Titled “9GAG LOTR Series: New Legend One Ring”, the four-part video series features stunning VFX by Indian YouTuber Shutter Authority, Berlin-based filmmaker Dmitry Volnyy, and creative duo Erik & Michaela from Norway, who are the special effects gurus behind a number of Hollywood blockbusters, such as Shazam!, Home Sweet Home Alone and Secret Headquarters. For this special series, the three creators turn themselves into sword-wielding heroes to protect The One Ring from the enemies. They travel from the Second Age to the present day, where they work collaboratively, cast spells and engage in combats to keep the evil at bay.

The series begins with a hero facing off a Giant Troll in his conquest, then defending himself by transforming his smartphone into a bow. As he drops the Ring in the battle, it falls into the hands of the second hero, then in captive. The hero this time puts on the Ring and disappears in front of his captors and skilfully subdues them, only to be struck by a falling rock. The Ring is once again lost. Fortunately, our final hero Michaela is able to take hold of it before the enemy does. She then summons Gandalf’s wizard staff in the middle of a battle to cast a wave that decimates Sauron’s Army. The series has received much fanfare since its debut, with a specially compiled finale – aired on 9GAG’s Instagram and YouTube on 6 October.

As part of the initiatives, 9GAG also invites gamer-fans to show their support for the heroes in a Profile Picture game, in which over 1,000 fans have taken part to replace their avatars with the One Ring imagery.

“The Lord of the Rings: Rise to War”, developed by NetEase Games and Warner Bros. Interactive Entertainment, is currently available for download on the App Store, Google Play Store and Galaxy Store. 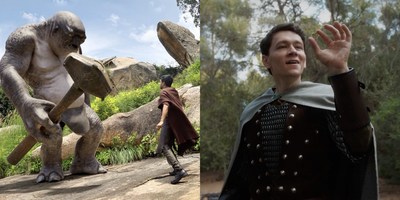