Play the 2021 Game of the Year with a Friend for Free with Friend’s Pass, Now Featuring Additional Language Voice-Overs 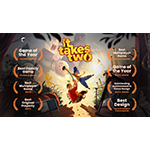 “It Takes Two was born as a passion project that Hazelight spent years perfecting, and our team has been humbled with the growth of our vibrant community over the past year. With the Nintendo Switch version, we get to welcome new players into the game’s magical world,” said Josef Fares, Founder and Game Director at Hazelight Studios. “Turn Me Up Games has excelled in bringing It Takes Two’s immersive world to Nintendo Switch.”

“As fans of It Takes Two and Hazelight, we’ve taken great care in bringing this beloved, award-winning title and its adventurous spirit to new players on Nintendo Switch,” said Scott Cromie, Executive Producer at Turn Me Up Games. “We loved collaborating with the Hazelight team and are excited for players to experience the incredibly fun co-op of It Takes Two, even on the go.”

Starting today, players can dive into It Takes Two’s thrilling couch co-op with a separate set of Joy-Cons or a pro controller per player, local wireless play by linking two Switch consoles, or online co-op with another Switch player. Those who own the game can also invite a friend to play for free using Friend’s Pass**, tackling ever-changing challenges that can only be solved together.

The critically-acclaimed title lets players step into the shoes of Cody and May, two humans trapped after a magic spell turns them into dolls, all while encountering ridiculous challenges around every corner. The unpredictable nature of each level will bring players through a uniquely metaphorical gameplay experience that tells a universal story of relationships, as Cody and May must work together to save their fractured marriage on the brink of divorce.

For more information and to stay up to date on It Takes Two for Nintendo Switch, visit https://www.ea.com/games/it-takes-two/about/nintendo-switch and the two accompanying blogs that further detail its Co-op Requirements.

*Based on time zone differences across regions, It Takes Two will be coming to the Nintendo Switch™ on November 4, 2022 for the majority of regions, or November 5, 2022 for Japan, Australia, New Zealand, and South Korea.

Nintendo Switch is a trademark of Nintendo of America Inc.

About Turn Me Up Games

Turn Me Up Games is an independent developer with years of experience producing video games and other interactive media. Founded in 2011, the Burbank-based team of developers, designers, artists, and producers lead development and coordinate production between offices in Italy and throughout Europe. Specializing in licensed and original IP, as well as ports and co-dev, Turn Me Up Games prides itself on faithfully stewarding beloved titles to new platforms for experiences that are both comfortably familiar and excitingly unprecedented.

Hazelight is an award-winning independent game development studio based in Stockholm, Sweden. Founded in 2014 by Josef Fares, film director and creator of the award-winning game Brothers: A Tale of Two Sons, Hazelight continues to push gaming into new uncharted waters with their unique way of weaving story and gameplay together. In 2018, Hazelight released the BAFTA award-winning A Way Out, the first ever co-op only third person action-adventure, as part of the EA Originals label.

EA SPORTS, Battlefield, Need for Speed, Apex Legends, The Sims, Titanfall and Plants vs. Zombies are trademarks of Electronic Arts Inc. STAR WARS © & TM 2015 Lucasfilm Ltd. All rights reserved. John Madden, NFL, FIFA and F1 are the property of their respective owners and used with permission.

This is EA Originals. A place where untold stories, unheard voices, and unseen worlds are discovered. Will you turn back? Or press forward? To discover more, visit www.ea.com/ea-originals.