NEW YORK–(BUSINESS WIRE)–#beyondkingtut–Marking 100 years since the discovery of King Tut’s tomb in the Valley of the Kings, Beyond King Tut: The Immersive Experience will be open in four cities across North America, bringing the incredible story of the ancient pharaoh to life in new ways. Created in partnership with the National Geographic Society, the stunning exhibition takes visitors on a time-traveling journey flooded with sight, sound and intrigue through the world of King Tut—the boy who reigned as pharaoh of Egypt more than 3,000 years ago—and the 1922 discovery of his tomb and treasures that has captured the imagination of the world ever since.

Beyond King Tut guests can explore nine galleries that chronicle the historic discovery, the king’s life and family, and a voyage to the afterlife in the following locations: 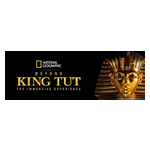 Beyond King Tut visitors will meet Ancient Egyptian gods like Ra and Anubis, descend into King Tut’s burial chamber, join his quest for immortality and relive the discovery of the king’s tomb with all his treasures waiting inside, reclaimed from the desert sand after 3,000 years. With nine galleries to explore on the multi-sensory, multimedia journey, guests will wind through the story of a young boy whose name still looms large and how he changed the ancient – and modern – world. This exhibition goes beyond a traditional artifact display using the power of photography and technology, ensuring that the artifacts from King Tut’s tomb remain in their country of origin.

Produced by Paquin Entertainment Group, Beyond King Tut is developed in association with Immersive, whose creative team draws from extensive experience creating and marketing cultural content worldwide including the King Tut artifact exhibitions attended by more than 19 million guests. Under the creative direction of Montreal’s world-renowned Normal Studio, Beyond King Tut harnesses projection mapping and new technologies to create stunning visual environments that invite visitors to leave the modern world behind and glimpse an ancient time like never before. Beyond King Tut has aligned with The American Research Center in Egypt (ARCE), whose mission is to study and safeguard Egypt’s cultural heritage, to highlight digital Egypt-related content, develop programming and promote educational outcomes.

Exhibition guests can opt to delve deeper into the tomb discovery via an award-winning companion virtual reality (VR) experience making its North America debut in a dedicated VR theater. “Tutankhamun: Enter the Tomb” gives the feeling of flying through the underground chambers and seeing the treasures as they were when they were discovered in November 1922. The eight-minute VR journey is voiced by lauded English actor Hugh Bonneville and created by CityLights, a leader in premium VR content.

“Beyond King Tut tells a story 3,300 years in the making, going beyond the iconic mask to bring people into his world in new ways and larger than life – guests will get to know the young boy who suddenly became pharaoh, see stunning imagery of his treasures that are now enshrined in Egypt, journey to the ancient Egyptian afterlife, and feel the thrill of discovery,” said Beyond King Tut creative producer Mark Lach.

Ever since the sensational discovery of King Tut’s tomb 100 years ago, influences from his world have made their way into the global consciousness across art, fashion, décor, architecture, entertainment and beyond. As King Tut’s legacy continues to enthrall people around the world, guests of all ages can explore his story at Beyond King Tut as the tour continues across North America with more cities to be announced.

Tickets are timed and dated, and advance purchase is strongly encouraged with peak dates and times in high demand. Prices vary by location with package rates for families, seniors, students and groups. VIP Tickets include a flex ticket for anytime entry, merchandise and entry to the award-winning “Tutankhamun: Enter the Tomb” virtual reality companion experience.

Join the Conversation on Social Media:

About Beyond King Tut

Covering new ground by bringing together unparalleled partners from the fields of creative artistry to exploration and conservation in Egypt, a team of cultural events industry veterans have come together with the vision to lead the evolution of immersive cultural content resulting in Beyond King Tut, produced by Paquin Entertainment Group, developed in partnership with Immersive and National Geographic Society, under the creative direction of Montreal’s Normal Studio.

About the National Geographic Society

The National Geographic Society is a global nonprofit organization that uses the power of science, exploration, education and storytelling to illuminate and protect the wonder of our world. Since 1888, National Geographic has pushed the boundaries of exploration, investing in bold people and transformative ideas, providing more than 15,000 grants for work across all seven continents, reaching 3 million students each year through education offerings, and engaging audiences around the globe through signature experiences, stories and content. To learn more, visit www.nationalgeographic.org or follow us on Instagram, Twitter and Facebook.

Metaverse Business Analysis Report 2022: How Notable Enterprises and Startups are Developing the Building Blocks of the Metaverse with their Technological Prowess