Spatial&, the newest portfolio company from Walmart’s Store N°8, and
DreamWorks Animation present a virtual reality activation offering a
glimpse into the future of merchandising through the beloved film
franchise

BENTONVILLE, Ark.–(BUSINESS WIRE)–Have you ever wished you could ride alongside Hiccup and Astrid on the
back of a dragon, soaring high in the sky and swooping over incredible
landscapes? Walmart (NYSE: WMT) and DreamWorks Animation are making this
a reality – a virtual reality – through an exclusive, first-of-its-kind
immersive V-commerce activation tied to the upcoming theatrical release
of How to Train Your Dragon: The Hidden World. 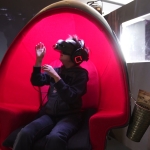 Just ahead of the highly anticipated film hitting theaters nationwide on
February 22, the How to Train Your Dragon: The Hidden World
Virtual Tour, powered by HP, Intel and Positron, will visit select
Walmart parking lots. Spatial&, a V-commerce startup focused
on creating next generation merchandising experiences using cutting-edge
technology and storytelling tools, collaborated with DreamWorks
Animation to create this unique VR-driven shopping event designed to
foster one-on-one relationships with the film’s famous characters. As
part of this, the tour will feature How to Train Your Dragon
merchandise available for purchase in a branded, immersive gift shop.

The experience, directed by Kurt Mattila and Gil Zimmerman and produced
by Armand Weeresinghe, begins in an onboarding room where the film’s
mischievous twins Ruffnut and Tuffnut greet guests, setting the scene
for this magical adventure. Participants are then led into a dragon’s
cave to suit up in headsets, and sit in specialized Positron motion VR
chairs powered by the HP VR backpack, before embarking on a truly
life-like five-minute journey through the breathtaking Hidden World with
the help of Astrid, Hiccup, Toothless, Hookfang and more.

This remarkable activation gives everyone, ages 8 and up, the
opportunity to interact with How to Train Your Dragon characters
through immersive real-world sound, motion and sensory cues. Viewers are
drawn fully into the experience physically and emotionally, creating
deep bonds with the dragons and characters they encounter along the way.

“Collaborating with DreamWorks Animation and its iconic How to Train
Your Dragon franchise is such an exciting way to bring Spatial&’s
first ever activation to the public,” said Katie Finnegan, chief
executive officer of Spatial&. “Spatial& was founded based on the belief
that VR will transform merchandising and retail and we can’t wait to
finally share this uniquely immersive shopping experience with consumers
across the country.”

“We have set an extremely high bar for quality and innovation for the How
to Train Your Dragon franchise, and our partners at Spatial&
exceeded our expectations with their incredible work on this project,”
said Abhijay Prakash, chief operating officer of DreamWorks Feature
Animation. “This latest Dragon film displays DreamWorks’ best in class
creative abilities combined with state of the art advances in animation
technology, and we are thrilled that this experience created by Spatial&
lives up to that reputation while allowing fans to journey straight to
the center of this unique world we’ve created for the film. It’s a truly
exhilarating experience.”

“The How to Train Your Dragon: The Hidden World Virtual Tour is a
great opportunity for our customers to engage with this fantastic
franchise. It’s also the most recent example of how Walmart continues to
use emerging technologies, including virtual reality, to enhance the
experiences of shoppers across the country,” said Scott McCall, senior
vice president for entertainment, toys and seasonal, Walmart U.S.
“Customers will also get a preview of the exciting new products
available at Walmart for How to Train Your Dragon fans of all
ages at the great prices customers expect from Walmart.”

Following the VR experience, participants are guided into a How to
Train Your Dragon themed gift shop where they can purchase
memorabilia featuring the characters they befriended and created deep
connections with during the activation. Items for sale include
everything a little Viking might want, from plush toys to action figures
to franchise DVDs and video games. Select merchandise from the
collection will be available in 2,000 Walmart stores nationwide and at http://walmart.com/dragonstourwalmart.

The entire activation is brought to life through top-of-the-line
hardware and software from HP, Intel and Positron, official sponsors of
the tour. Spatial& and DreamWorks Animation leveraged servers and
workstations powered by Intel® Xeon® Scalable processors to stitch
together high-resolution images and 360-degree VR videos to create this
stunning experience. During the activation, HP Windows Mixed Reality
Headsets and OMEN by HP Mindframe Headsets, alongside PCs powered by
Intel® Core™ processors, make it possible for consumers to fully step
into and enjoy the Hidden World. The fun continues outside the VR
experience where HP Chromebooks allow parents to follow along with the
content their children are viewing and Omen by HP Gaming Laptops, based
on Intel technology, provide entertainment for waiting participants and
passersby.

“For 80 years, HP has delivered innovative technology to help filmmakers
create memorable moments,” said Joanna Popper, global head of virtual
reality for location based entertainment at HP Inc. “Working together
with DreamWorks Animation, Walmart and Intel, we are using virtual
reality to take the Hidden World from storytelling to story-living by
bringing audiences to the center of the narrative.”

“Intel’s end-to-end solutions together with technology from HP and the
creative minds from Spatial& and DreamWorks Animation have brought to
life new, immersive cinematic experiences for audiences to connect with
the How to Train Your Dragon world,” said Kumar Kaushik, general
manager of AR/VR solutions, client computing at Intel. “From the
imaginations of content creators to taking a VR journey on the back of a
dragon, technology is unleashing new storytelling possibilities for
developers and consumers alike.”

“How to Train Your Dragon: The Hidden World Virtual Tour
leverages Positron’s Voyager® VR motion chair to deliver a magical,
multi-sensory encounter where viewers can enjoy hands-on interaction
with their favorite characters from the film,” said Jeffrey Travis, CEO
of Positron. “Spatial& is our first client to introduce interactive hand
tracking along with 6DOF (6 degrees of freedom) in our Voyager® chair.
We can’t wait for audiences to experience this new level of immersive
storytelling, and we are proud be a part of this groundbreaking project.”

The How to Train Your Dragon: The Hidden World Virtual Tour will
visit the following cities and Walmart stores between February 15 and
April 9:

Walmart Inc. (NYSE: WMT) helps people around the world save money and
live better – anytime and anywhere – in retail stores, online, and
through their mobile devices. Each week, nearly 265 million customers
and members visit our more than 11,200 stores under 55 banners in 27
countries and eCommerce websites. With fiscal year 2018 revenue of
$500.3 billion, Walmart employs over 2.2 million associates worldwide.
Walmart continues to be a leader in sustainability, corporate
philanthropy and employment opportunity. Additional information about
Walmart can be found by visiting http://corporate.walmart.com,
on Facebook at http://facebook.com/walmart and
on Twitter at http://twitter.com/walmart.

Spatial& is a V-commerce startup focused on creating next generation
merchandising experiences. Spatial&’s team of storytellers,
technologists and retail experts believe VR’s ability to fuse the
emotional bonds between consumers and brands has the potential to
reinvent the customer journey. It is the second portfolio company to
launch from Store N°8, Walmart’s incubator dedicated to uncovering ideas
that will transform the future of commerce.

DreamWorks Animation (DWA), a division of the Universal Filmed
Entertainment Group, within NBCUniversal, a subsidiary of Comcast
Corporation, is a global family entertainment company with feature film
and television brands. The company’s deep portfolio of intellectual
property is supported by a robust, worldwide consumer products practice,
which includes licensing, and location-based entertainment venues around
the world. DWA’s feature film heritage includes many of the world’s most
beloved characters and franchises, including Shrek, Madagascar, Kung Fu
Panda, How to Train Your Dragon, Trolls and The Boss Baby, and have
amassed more than $14.5 billion in global box office receipts.
DreamWorks Animation’s television business has quickly become one of the
world’s leading producers of high-quality, animated family programming,
reaching consumers in more than 190 countries. Creating a diverse array
of original content in a variety of formats and delivering deep, fully
immersive worlds served up with compelling characters, the prolific
studio has garnered 22 EmmyⓇ Awards since inception in 2013.

HP
Inc. creates technology that makes life better for everyone,
everywhere. Through our product and service portfolio of personal
systems, printers and 3D printing solutions, we engineer experiences
that amaze. HP’s virtual
reality technology is founded upon our rich history of product
innovation and deeply rooted customer relationships which enables us to
deliver the most immersive technologies that help businesses lead their
industries. OMEN
by HP products provide the performance and enthusiast gaming
community with the tools needed to enjoy their favorite titles and excel
in esports.

Intel (NASDAQ: INTC), a leader in the semiconductor industry, is shaping
the data-centric future with computing and communications technology
that is the foundation of the world’s innovations. The company’s
engineering expertise is helping address the world’s greatest challenges
as well as helping secure, power and connect billions of devices and the
infrastructure of the smart, connected world – from the cloud to the
network to the edge and everything in between. Find more information
about Intel at newsroom.intel.com
and intel.com.

About Positron and Voyager®

Positron
is a studio focused on cinematic VR. Based in Los Angeles, the team
includes filmmakers, mechatronics engineers, designers, software
developers and artists who collaborate together to create premium VR
experiences and products. Positron works with companies such as
Universal Studios, Disney, DreamWorks, Verizon, Intel, and many more to
deliver cinematic VR experiences on Voyager®, its award-winning,
full-motion VR chair platform that has been called “the future of
movies.” Integrating beautiful design and high-end engineering, the
chair reflects a passion for VR storytelling. Voyager® delivers a
completely new level of immersion in VR by providing a comfortable,
fully integrated personal VR theater that incorporates whisper-quiet
robotic rotation and pitch motion, audio-driven haptic feedback, scent
dispensing, cabin lighting and specialized seating. Voyager® VR cinemas
are available now for cinemas, museums, and events that desire to
provide a premium VR experience.