DALLAS, March 4, 2022 /PRNewswire/ — MG Entertainment announces the world premiere and screening of “Tragedy Strikes”, a music video created by 16-year-old director Morgan Gullett with 18-year-old singer-songwriter Sydnie Stephens, at the 13th New Media Film Festival on June 2nd, in Los Angeles. This striking music video, which was primarily filmed underwater is the result of a strong collaboration between two focused, young women who are carving their path in the industry.

Gullett, a high school sophomore and aspiring director from Fort Wayne, Indiana, discovered Stephens on social media and contacted her about making a music video together. Stephens worked with DC-based music producer Mark Kenneth Williams (Vertical Horizon, Hootie and the Blowfish), on having her song professionally recorded while Gullett focused on creating the concept and selecting a film crew. The young women fundraised together to earn what was needed for the music video’s production, as well as the post-production editing work with Los-Angeles based VFX editor, Eliot Gurrin. Other key cast and crew members include Dallas-based producer Teresa Jolie, LA-based underwater cinematographer, Brett Stanley, and San Antonio-based DP Larry Servin. After a nationwide casting call, Milynn [Sarley] Moon, (Guardians of the Galaxy Vol. 2), and Lasse Engel were selected as cast members.

Gullett, 16, has won multiple entrepreneur awards and grants as well as several film-festival awards for projects she has directed, produced, written and cast. Gullett’s directorial debut was in 2021 with “Easy for Me”, a music video she created for country-pop artist, Lauren Gottshall. Gullett will be attending a film intensive in Los Angeles this summer, she is directing a short film that she wrote “Behind Her Back” this Fall, and she is currently in development talks about a feature film for which she owns the (IP) story copyright. Gullett plans to attend film school after she graduates high school in 2024.

Stephens, 18, who is originally from the Dallas, Fort Worth area, has been studying songwriting and journalism at Brigham Young University in Utah and has been writing songs since she was 10 years old. She has worked with well-known Gospel group, The Bonner family, Ashley Townsend and in 2020, Stephens was accepted into the prestigious Women’s Chorus at BYU. While Stephens loves performing and has performed her music in various venues across the country, she is passionate about songwriting and working toward a career as a lyricist and / or soundtrack songwriter. Her music is available through various streaming platforms, including Spotify, Apple Music, Amazon music & iTunes.

“Tragedy Strikes” releases on March 4th on the streaming platforms listed above, as well as on both Gullett and Stephens websites: www.morgangullett.com and www.sydniestephens.com 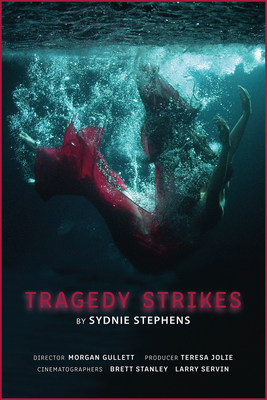