The Linde Center for Music and Learning to House the New Tanglewood
Learning Institute Introducing More Than 140 Leading-Edge Programs
Connecting Patrons with Musicians, Artists, and Cultural Leaders Through
Wide-Ranging Activities

BOSTON & LENOX, Mass.–(BUSINESS WIRE)–Celebrating a transformational milestone in the 82-year history of its
summer home, Tanglewood, the Boston Symphony Orchestra (BSO)
announces the opening of the Linde Center for Music and Learning,
a new four-building complex that will be home to the new Tanglewood
Learning Institute (TLI). Offering participants an unprecedented and
expansive array of more than 140 interactive and engaging cross-cultural
activities and programs, the BSO’s ambitious new initiative will offer
visitors a sense of discovery and engagement on a scale never before
offered by the festival, which welcomes more than 300,000 visitors
annually. Notable presenters will include Madeleine K. Albright,
Secretary of State (1997–2001); Pulitzer Prize-winning historian and
author Doris Kearns Goodwin; cellist Yo-Yo Ma; soprano Renée
Fleming; BSO Music Director Andris Nelsons; composer John
Williams; and playwright Tom Stoppard, among a long list of
acclaimed artists and important cultural figures of our time. For
details on all the Tanglewood Learning Institute programs, visit www.tli.org. 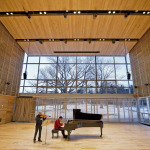 Opening on June 28, the new multiuse buildings of the Linde Center for
Music and Learning will also provide concert and rehearsal space for the
Tanglewood Music Center (TMC)—the BSO’s acclaimed summer music
academy—and establish Tanglewood for the first time as a year-round
facility. The Linde Center is designed by William Rawn Associates
Architects and will be the largest building project at Tanglewood in
25 years, since the construction of award-winning Seiji Ozawa Hall
(1994), also designed by William Rawn Associates.

The first fundamental change in programming since Tanglewood was founded
in 1937, and the Tanglewood Music Center (BSO’s acclaimed summer music
academy) launched its first season in 1940, the new Tanglewood Learning
Institute programming is a response to wider cultural shift towards
learning and participatory activities that complement the concert
experience. Designed for newcomers to Tanglewood and longtime festival
patrons, Tanglewood Learning Institute programs will link Tanglewood
performances to relevant themes from the worlds of visual arts, film,
history, philosophy, and current events, exploring thought-provoking
ways to better understand the world through the lens of music, as well
as breaking down the traditional barrier between performer and listener.

From the exploration of a new work for voices and orchestra inspired by
the letters of celebrated artists Georgia O’Keeffe and her husband
Alfred Stieglitz to an eight-day exploration with the Juilliard String
Quartet and TMC faculty and Fellows, the Tanglewood Learning Institute
represents a brand-new chapter in the life of Tanglewood. Among the new
initiatives are Saturday morning Focal Point programs for amateur
visual artists in the fields of painting, photography, and drawing; a
Sunday evening Cinematics film series relating back to Tanglewood
programming; TLI immersion weekends which take a deep dive into
major musical themes of the summer; TLI OpenStudio offering an
insider’s look at master classes led by today’s leading performers; Meet
the Makers presenting a wide spectrum of creators sharing the
inspiration behind their craft; and major cultural thinkers of our time
featured in The Big Idea.

“All of us at the BSO are thrilled to launch the Tanglewood Learning
Institute and open a transformative new chapter of programming to enjoy
alongside the great tradition of Tanglewood performances since 1937,”
said BSO President and Chief Executive Officer Mark Volpe. Link
to full message.

Expanding to a year-round facility will further help “bring the world to
Tanglewood, and Tanglewood to the world,” said Judith and Stewart Colton
TLI Director Sue Elliott. “TLI’s many and varied year-round
programs will engage diverse participants whose interests reflect their
curiosity about the wider world, and who are eager to participate in
meaningful, memorable experiences that help build a more civil society.” Link
to full message.

Linde Center for Music and Learning: A Gathering Around the Red Oak
The
complex boasts three technically advanced studios designed to maximize
its flexibility for performance, rehearsal, and educational offerings of
the Tanglewood Learning Institute. In addition, Cindy’s Café will be an
informal place for musicians and audience members to interact—a hub for
visitors, TMC Fellows and faculty, BSO players, and TLI participants.
The buildings gather around a 100-year-old Red Oak, with a serpentine
covered walkway connecting each building and framing views and paths
through the landscape. As part of the overall major investment in
Tanglewood, the BSO will also revitalize and strengthen Tanglewood’s
bucolic Berkshire 524-acre campus, with new plantings, pedestrian
circulation improvements, and the restoration of views of the
Stockbridge Bowl.

The opening of the Linde Center complex and TLI programs, June 28–30,
will include a special ribbon-cutting ceremony for the community,
funders, builders, staff, and orchestra on Friday, June 28; and open
houses with family-friendly activities free to the public on June 29,
30, and July 1.

About the BSO & Tanglewood

The BSO, one of the leading international orchestras, reaches over 1.2
million live listeners through its concert performances in Boston and
Tanglewood and millions more via the internet, radio, television,
education programs, recordings, and national and international tours.
The BSO’s website, www.bso.org—receiving
approximately 20 million visitors annually and generating over $134
million in revenue since its launch in 1996. One of the most popular and
acclaimed music festivals in the world, Tanglewood—the Boston Symphony
Orchestra’s summer home since 1937—is in the beautiful Berkshire Hills
between Lenox and Stockbridge. Tanglewood is a driver of more than $103
million annually in economic impact in Berkshire County each summer. Link
to study.