PALO ALTO, Calif.–(BUSINESS WIRE)–#BYJUS–Osmo from BYJU’S is offering up to 40% off select learning kits, games, and accessories during the Amazon Prime Early Access Sale (Oct 11-12). In addition, BYJU’S Learning featuring Disney is offering up to 30% off select kits. The Prime Early Access Sale begins Oct. 11 at 12:00 AM Pacific Time and ends Oct. 12 at the end of day. 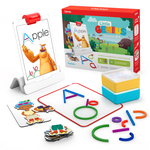 The following Osmo kits and games are 40% off during Prime Early Access:

The following Osmo kits, games, and accessories are 30% off during Prime Early Access:

The following Osmo games and accessories are 20% off during Prime Early Access:

The following BYJU’S Learning Featuring Disney kits are 30% off during Prime Early Access:

BYJU’S, the world’s largest education technology company, provides engaging and personalized learning programs to more than 150 million students around the world. Founded and headquartered in India, BYJU’S mission is to make high-quality and innovative education available to all students. The BYJU’S family of brands cater to a wide range of learners of all ages and includes BYJU’S FutureSchool, Epic, Osmo, Tynker and the BYJU’S Learning App featuring Disney. With users in more than 100 countries and learning programs offered in multiple languages, BYJU’S is at the forefront of creating tech-driven and immersive learning experiences for students around the world. For more information, visit www.byjus.com/global.

About Osmo from BYJU’S

Osmo is an award-winning STEAM brand, which is part of BYJU’S, the leading global edtech company. Osmo and Osmo Education products are used in more than 2.5 million homes and 50,000 classrooms. Osmo builds a universe of hands-on gamified learning experiences validated by education experts that nourish the minds of children. Leveraging its proprietary reflective artificial intelligence, Osmo unleashes the power of physical tools combined with the digital world through augmented reality to deliver dynamic phygital education games, programs and platforms. Learn more at PlayOsmo.com and Osmo Education.