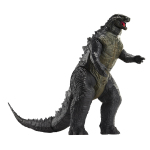 JAKKS Pacific will unveil its portfolio of Godzilla: King of the
Monsters action figures, role-play and play sets at the
International Toy Fair in New York on February 16-19, 2019. The entire
toy line will be available worldwide, launching in April 2019
exclusively at Walmart in the U.S., with prices ranging from
$9.99-$59.99.

Godzilla: King of the Monsters is the next chapter in Warner
Bros. Pictures’ and Legendary Entertainment’s Monsterverse and
much-anticipated follow-up to the highly successful 2014 release Godzilla.
The pop culture icon, which Toho originated in 1954, has appeared in
over 30 films spanning 65 years. This new chapter reunites Godzilla with
his most famous allies and foes from the franchise – King Ghidorah,
Mothra and Rodan – who collide in an epic, world-spanning clash, with
humanity’s very existence hanging in the balance.

“Godzilla is an iconic character, and we are excited to be partnering
with Toho and Legendary on an extensive line of action figures,
role-play and play sets, bringing the King of the Monsters from the
movie screen to your home,” said Virginia Reneau, VP Global Licensing,
JAKKS Pacific.

Select Godzilla: King of the Monsters toys include:

3.5-inch Monster Battlepacks: Kids can recreate the film’s epic
battles and action with a unique Godzilla figure, an articulated
legendary monster figure and a backdrop accessory. Each two-figure
Battlepack is recommended for ages 3 and older at a suggested retail
price of $9.99.

6-inch Monster Figure: Kids can collect their favorite legendary
monsters—King Ghidorah and Rodan—in 6-inch scale. Each articulated
figures comes with a vehicle accessory and a breakable building. King
Ghidorah and Rodan are sold separately for $14.99 and are recommended
for ages 3 and older.

12-inch Godzilla Figure: This amazing Godzilla stands at 12
inches tall and over 20 inches long. He is fully poseable at the neck,
shoulders, legs and tail. This figure is recommended for ages 3 and
older at a recommended retail price of $19.99.

24-inch Godzilla Figure: This Godzilla figure is the ultimate
gift for Godzilla fans. Standing at 24 inches tall and over 36 inches
long, this figure is fully poseable, with articulation in the jaw, neck,
shoulders, hands, legs, feet and tail. Its massive scale and incredible
detail will bring Godzilla to life for fans ages 3 and older, and will
be available at a recommended retail price of $59.99.

About Godzilla:
Godzilla first appeared in Toho’s “Godzilla”
(1954), a classic monster movie widely regarded a masterpiece. The work
launched a monster franchise that expanded over 64 years with more than
30 films. Toho’s line of original movies continues up to the
controversial “Shin Godzilla” (2016); the following year, Toho launched
its first animated production currently streaming on Netflix. The
character has been adapted via numerous international motion pictures,
including TriStar Pictures’ “Godzilla” (1998) directed by Roland
Emmerich (“Independence Day”) and Warner Bros. Pictures’ and Legendary
Entertainment’s “Godzilla” (2014), directed by Gareth Edwards (“Rogue
One”), re-introducing the character to a new generation and a global
audience. Godzilla continues to stomp through popular culture with
“Godzilla: King of the Monsters,” directed by Michael Dougherty
(“Krampus“), to be released in May 2019, and “Godzilla vs. Kong
(tentative title)” planned in 2020.

About Godzilla: King of the Monsters
Following the global
success of Godzilla and Kong: Skull Island comes the next
chapter in Warner Bros. Pictures’ and Legendary Pictures’ cinematic
Monsterverse: Godzilla: King of the Monsters. Directed by Michael
Dougherty (Krampus) from a script he wrote with Zach Shields,
based on the character “Godzilla” owned and created by TOHO CO., LTD.
The new story follows the heroic efforts of the crypto-zoological agency
Monarch as its members face off against a battery of god-sized monsters,
including the mighty Godzilla, who collides with Mothra, Rodan, and his
ultimate nemesis, the three-headed King Ghidorah. When these ancient
super-species—thought to be mere myths—rise again, they all vie for
supremacy, leaving humanity’s very existence hanging in the balance.

The film was produced by Mary Parent, Alex Garcia, Thomas Tull, Jon
Jashni and Brian Rogers, with Zach Shields, Barry Waldman, Hiro
Matsuoka, Keiji Ota, Yoshimitsu Banno and Kenji Okuhira serving as
executive producers, and Ali Mendes and Jay Ashenfelter co-producing for
Legendary. A presentation of Warner Bros. Pictures and Legendary
Pictures, in association with Toho Co. Ltd., Godzilla: King of the
Monsters hits theaters worldwide beginning May 31, 2019. It will be
distributed in 3D and 2D and IMAX by Warner Bros. Pictures, except in
Japan, where it will be distributed by Toho; and in China, where it will
be distributed by Legendary East.

About Toho:
Toho Company, Limited, is a Japanese
entertainment studio focused on the development, production, exhibition,
and distribution of powerful content for motion pictures, television and
theater. Founded in 1932, it remains a prominent force in bringing
brands and original storytelling with versatile talents to audiences
worldwide. Its subsidiaries include Toho Cinemas, the highest grossing
exhibition company in Japan.

About Legendary:
Legendary
Entertainment is a leading media company with film (Legendary Pictures),
television and digital (Legendary Television and Digital Media) and
comics (Legendary Comics) divisions dedicated to owning, producing and
delivering content to worldwide audiences. Legendary has built a library
of marquee media properties and has established itself as a trusted
brand which consistently delivers high-quality, commercial entertainment
including some of the world’s most popular intellectual property. In
aggregate, Legendary Pictures-associated productions have realized
grosses of more than $16 billion worldwide at the box office. To learn
more visit: www.legendary.com

About JAKKS Pacific, Inc.
JAKKS
Pacific, Inc. (NASDAQ: JAKK) is a leading designer, manufacturer and
marketer of toys and consumer products sold throughout the world, with
its headquarters in Santa Monica, California. JAKKS Pacific’s popular
proprietary brands include Perfectly Cute™, Real Workin’ Buddies™,
Squish-Dee-Lish™, XPV®, Disguise®, Moose Mountain®, Funnoodle®, Maui®,
Kids Only!®; a wide range of entertainment-inspired products featuring
premier licensed properties; and C’est Moi™, a youth skincare and
make-up brand. Through JAKKS Cares, the company’s commitment to
philanthropy, JAKKS is helping to make a positive impact on the lives of
children. Visit us at www.jakks.com and
follow us on Instagram (@jakkstoys),
Twitter (@jakkstoys)
and Facebook (JAKKS
Pacific).