COCOA BEACH, Fla., May 29, 2019 /PRNewswire/ — Kids can now instantaneously reinvent the digital world. GameBender, the education startup from the creators of Makey Makey, today introduced a radical new gaming system that helps kids learn to code while playing and “bending” code. GameBender unleashes wild creativity during gameplay, and creates a path into coding that looks more like a party or an art class, less like homework.

“If you can bend and break the game, that’s a true maker’s game,” said Dale Dougherty, Founder and CEO of Make: Magazine / Maker Faire.

GameBender has grant funding from the National Science Foundation and a partnership with Scratch, a community of 40 million users providing access to more than one million coded projects like games, apps and DIY TV. Parents, engineers, teachers, heads of nation-states, scientists, and kids (with parental approval) can pre-order GameBender starting today for $299 USD (a $100 discount from the estimated in-store retail price of $399) on gamebender.com.

The National Science Foundation (NSF) Program Director, Rajesh Mehta added, “We’re excited to fund companies like GameBender, helping to launch their creative ideas into innovative products for kids with the potential to make a substantial positive impact on society and the world.”

The involvement of the NSF and Scratch, along with GameBender’s deep commitment to nutritious gaming, has Google employees like Seth Raphael, Senior Designer of the Future, saying, “This is the only game platform I will let my kids have.”

What’s In the Box
The GameBender innovative gaming system includes three cool hardware products, 3D glasses and supporting materials that make getting started for kids, parents and teachers easy right out of the box.

For parents, teachers, or kids who are serious about coding and learning socially, GameBender also offers a Social Coding Immersion Edition. For an extra $100 you get all of the above, as well as an extra controller, 50 Code Cards, three more pairs of 3D glasses, a code class curriculum, and a custom branded wireless keyboard and mouse.

The resulting experience is that “GameBender is an immersive tool that lets students sit in the seat of a videogame designer even if they are an absolute beginner,” said Colleen Graves, Creative Educational Director at JoyLabz.

The Power of the Glitch
With GameBender, kids aged eight to infinity can get inspired and reinvent the online gaming world, fundamentally changing the game rules by altering the underlying code. Here are some specific glitch examples:

“We’ve been making educational products for more than a decade. From Drawdio to Makey Makey, we’ve shipped more than 1 million products,” said Jay Silver, Founder and CEO of GameBender and Makey Makey. “We believe everyone is an inventor.” GameBender lets you reinvent the gaming world by offering you the power to control the game, make edits as you see fit and immerse yourself in a new experience of your own creation.

Senior VP of GameBender Todd Eddie, an engineer who co-designed the system calls it “A digital sandbox for code literacy and creative play.”

Gamebender will be live tweeting the launch from the founder’s handle @wakeupsilver. You can follow and join in on the discussion by following him or the hashtag #gamebender on Twitter.

About GameBender
GameBender, a Cocoa Beach-based education startup from the makers of Makey Makey, is on a mission to develop an entirely new type of digital world creativity. GameBender believes everyone is an inventor. The mission has been the same for a decade: “The World is a Construction Kit, let’s reveal all of us as the constructors that we are.” GameBender CEO and Founder, Jay Silver, has been making educational tools for more than a decade and has shipped more than 1 million products from Drawdio to Makey Makey. With their first gaming system, GameBender transforms gaming so kids have the power to use their creativity to reinvent it. GameBender’s system teaches kids to code by having fun, unleashing creativity while playing games. GameBender has grant funding from the National Science Foundation and a partnership with Scratch, a community of 40 million users providing access to more than one million coded projects like games, apps and DIY TV. To learn more, visit gamebender.com. 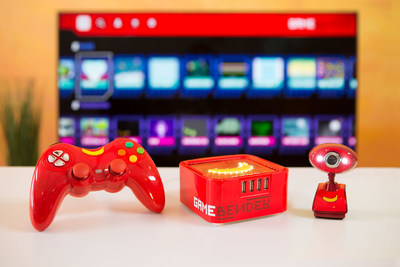