LOS ANGELES–(BUSINESS WIRE)–#explodingkittens—Exploding Kittens, a leading game and entertainment company, today announced that its most recently crowdfunded game, Hand-to-Hand Wombat, is now available at retailers internationally and soon at ExplodingKittens.com. Marking the company’s first social deduction game, Hand-to-Hand Wombat is a game of teamwork, towers, and troublemakers where players vote out suspicious Wombats. 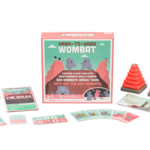 “We first debuted Hand-to-Hand Wombat on Kickstarter to create a campaign that was as fun and entertaining as the game,” said Elan Lee, Co-Creator and CEO of Exploding Kittens. “Now that we have input from some of our backers, the final game is better than we could have imagined. This real-time feedback during game development ensured we were able to give players exactly what they’re looking for – deception, unlikely alliances, and endless entertainment.”

Best for ages 7 and up, Hand-to-Hand Wombat brings a twist to traditional social deduction games by combining teamwork, dexterity, and betrayal. To play, each player is given a secret identity as either a Good Wombat or a Bad Wombat. With everyone’s eyes closed, Good Wombats build physical towers while Bad Wombats attempt to secretly sabotage their construction. When time is up, players open their eyes and vote on who they suspect is a Bad Wombat. Good Wombats earn points by completing towers, Bad Wombats earn points by preventing towers being built. The first team to three points wins!

“A lot of people don’t like social deduction games because it’s hard to lie without concrete evidence or a seasoned poker face, so we set out to solve that problem,” said Carol Mertz, Senior Game Designer of Exploding Kittens. “Hand-to-Hand Wombat is the perfect game to pump up the energy of game night and will get the entire table laughing, shouting, and guessing who the traitor could be.”

Initially debuted on Kickstarter in February 2022, Hand-to-Hand Wombat’s 30-day campaign raised nearly $1M from over 18,000 backers. Throughout the campaign, Exploding Kittens unveiled a secret $1 tier in which backers could purchase surprising items, including a custom-built tiny home, $500 worth of games, a curated display of dinosaur poop, a phone that looks like a cat, a vending machine, the world’s tiniest violin, a wombat car, and more.

Now available worldwide, Hand-to-Hand Wombat can be purchased at Target, Walmart, Amazon, and soon on ExplodingKittens.com for $25.99. For more information on how to play, check out this video.