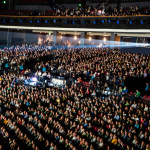 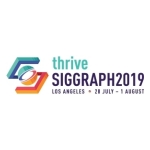 On the conclusion of this year’s event, SIGGRAPH 2019 Conference Chair Mikki Rose said, “SIGGRAPH 2019 was a true spectacle for our community and I could not be happier for this event to have helped creators and scientists recharge and refuel for the year ahead. This year’s presenters delivered incredible content, once again, and I saw more young folks eager to learn than I’ve seen in my 17 years volunteering. I am so proud to be part of this global community and cannot wait to see it thrive for many years to come.”

SIGGRAPH 2019 played host to the latest innovations in art, science, technology, and more from over 700 presenters throughout its five-day stay in downtown L.A., and was enjoyed by an international audience from 79 countries. Representation out of six of seven continents included participants from the United States, Canada, Japan, New Zealand, Nigeria, France, Brazil, China, and more. Not to be out done, this year’s Exhibition housed more than 180 diverse companies, each showcasing the latest in computer graphics hardware, software, and more. Select livestreamed sessions also reached an audience of nearly 20K additional viewers.

Other highlights from the conference included a fireside-chat format keynote on career and industry from Executive Vice President of Production at Marvel Studios Victoria Alonso (watch the livestream); the presentation of over 150 research papers; four world-premiere immersive experiences from Walt Disney Animation Studios, Magic Leap, Epic Games, and Parallux and NYU Future Reality Lab; a one-night-only Computer Animation Festival Electronic Theater event at Microsoft Theater; SIGGRAPH’s two-day Business Symposium; sneak peek Production Sessions focusing on not only film and games but prestige TV from Netflix and HBO; a Talk on foundational principles for “the metaverse” from Epic Games CEO Tim Sweeney; Tuesday night’s Real-Time Live! retrospective and live awards vote; the first-ever 55-seat venue for virtual reality storytelling in the VR Theater; and, a special session celebrating 40 years of the Facial Action Coding System, or FACS. Attendees also enjoyed digital art installations and the chance to create and make within the Experience Hall.

Best in Show – “Matching Visual Acuity and Prescription: Towards AR for Humans”

For more information about SIGGRAPH 2019, including official photographs from the conference, visit our press kit. To view select recorded sessions, click here. The 47th annual SIGGRAPH conference will be held in Washington, D.C., 19–23 July 2020.

About ACM, ACM SIGGRAPH and SIGGRAPH 2019

ACM, the Association for Computing Machinery, is the world’s largest educational and scientific computing society, uniting educators, researchers, and professionals to inspire dialogue, share resources, and address the field’s challenges. ACM SIGGRAPH is a special interest group within ACM that serves as an interdisciplinary community where researchers, artists, and technologists collide to progress applications in computer graphics and interactive techniques. The SIGGRAPH conference is the world’s leading annual interdisciplinary educational experience for inspiring transformative advancements across the disciplines of computer graphics and interactive techniques. SIGGRAPH 2019, the 46th annual conference hosted by ACM SIGGRAPH, took place from 28 July–1 August at the Los Angeles Convention Center.

The Label Partners with Sirvo Studios, Acclaimed Developer of Guildlings