LOS ANGELES–(BUSINESS WIRE)–Clix, the free streamer and guidance guru making it easier to find what to watch in a cluttered marketplace, today passes eight million registered users with 99.4% watching on their mobile phones. Launched ten months ago, Clix has nearly 6 million monthly active users, 57 percent are new visitors, and more than 50 percent are returning users. Clix now reaches nearly 100 million consumers on all social networks1 and is available in 120 million digital television homes as well as streaming to about 100 million online viewers monthly. 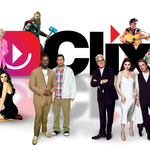 “At a time when the major streamers are hemorrhaging users, we’re gaining them. And we’ve hit a noteworthy milestone with mobile usage. GenZ and Millennials account for the majority of Clix’s demographic,” said Stacy Jolna, Clix Founder and CMO. “We’ve discovered a magnetic formula combining what to watch with cool products and services to buy. All on one platform, with no price of admission.”

“Clix is solidly positioned at the intersection of entertainment, technology and e-commerce,” said CEO and Founder, Ed Sullivan, whose previous business created the on-air look for networks such as CBS, ABC, Fox, BSKYB, and many others worldwide. “That intersection of creative tech and media is where our mobile, multi-tasking media consumers live. From the start, we architected the free Clix experience to delight and satisfy our fast-growing audience. It is our singular focus, our primary mission.”

“Watching video entertainment has become anxiety-ridden. It takes the average person and couples 37 minutes of wading through grids and guides to find what they truly want to watch in an ocean of content,” said Jolna, an award winning disrupter and innovator, who marketed and wrangled investments in TiVo from nearly every major media company, setting the stage for a successful IPO with a billion-dollar market cap on Nasdaq. Jolna created the first ever Telescoping Ads, Interactive Promos, and Video Showcases as a founding Executive Team member of TiVo, the digital recorder technology that many believe was the original catalyst in today’s direct-to-consumer transition of the entertainment and media industry. As senior vice president at NewsCorp, Jolna also developed and spearheaded the business for advanced entertainment guidance across digital platforms branded TV Guide SPOT and supported by Starcom Media with a strong launch advertising media buy that permitted the new business to earn a $650 Million valuation in just about one year.

“Our audience’s passion is popular culture including streaming programming featuring music, movies, multi-part series, and sports. They’re discerning and eager to quickly discover the best of streaming movies and series from around the globe,” said Sullivan, a media and entertainment industry branding leader who together with Jolna has been fast-forwarding the entertainment marketing and content experience for decades.

Jolna adds, “The Clix audience is comprised of pro-active, knowledgeable and powerful influencers within their social networks. These are the kind of passionate catalysts who can help make a hit show, or motion picture blockbuster. Our highly engaged social-sharing viewers helped light up thrillers like Squid Game from South Korea and Money Heist from Spain, and Ted Lasso, an American fish-out-of water comedy set in British soccer fields. Our goal is to discover the top video entertainment on any screen, every platform and make watching a fun experience rather than annoying work; Must-see right now rather than must delete!”

“In the midst of the chaos among media giants, Clix seems to have created its own non-combative niche,” said Mark Greenberg, Founder and former CEO, Epix Channel and digital entertainment thought leader. “The company is agnostic and agile and can tap into the current landscape to focus on the consumer, making entertainment personal. Clix is not a militarist in the streaming wars but a friendly ally to the leading streamers, guiding consumers to the most noteworthy talent in today’s ocean of entertainment.”

Added Greenberg, “Clix seems to recognize that the average consumer, dealing with his/her own life challenges, resents the indulgent high-level drama among the media giants. The consumer mindset: discovering new creative entertainment experiences that are hand-picked for just what, when, and where you desire – a direction that relieves the bombarded and exhausted consumer of needless time-consuming decision-making. It’s not a bad idea to be the new streaming media venture that helps consumers editorially and technically to make their entertainment decisions simple, fast, and worthwhile.” For more information visit: www.clixtv.com

Edward M. Sullivan is Clix founder and CEO. He is a recipient of multiple Emmy and Telly Awards for his entertainment industry marketing and branding as head of Pittard-Sullivan, which launched and re-launched over 200 channels worldwide, including CBS, ABC, Fox, HBO, Discovery Communications, and DirecTV. Sullivan was a catalyst in driving viewers to specific programs and networks for distributors, studios, content creators, and advertisers. His company also worked closely with Jolna on developing the brand and network-like interface for personal video recorder company TiVo and Microsoft’s WebTV.

Stacy Jolna, founder and Chief Marketing Officer, is the recipient of multiple News & Documentary Emmy Awards, the Cannes Lion and the Peabody Award. He has stood at the crossroads of media and technology for three decades. As a founding executive team member of TiVo, another successful industry disrupter, Jolna helped propel the company from concept to successful IPO and billion dollar market capitalization. He served as Chief Marketing Officer building the iconic TiVo brand and running point on investments by nearly every major media company. He served as SVP and General Manager of News Corp/TV Guide’s Digital TV Group. A successful broadcast journalism executive prior to going digital, at Time Warner/CNN he was Senior V.P. and Senior Executive Producer for Special Reports and launched award-winning “CNN Presents.”

Clix is a multi-platform streaming company at the intersection of entertainment, technology and e-commerce. It is free and reaches 120 million digital television homes, and streams to more than 100 million online viewers monthly. It has distribution on every screen for mobile, web and home consumption: along with the company’s web, iOS and Android distribution. Clix is carried on over 80 long-form linear channels on Roku, Apple TV, Amazon Fire TV, Box One, LG Smart TV, and all Plex TV channels. It features original entertainment, lifestyle, humor and sports programming from award-winning producers as well as emerging talent. Clix features social media influencers, celebrity athletes, chefs, comedians, eSports commentators, adventurers, and more. Its range of content spans Hot Trends, Extreme Sports, Fashion & Lifestyle, Travel & Adventure, Funny, Food & Wellness, Fitness, Kids Stuff, and more. Clix is also a promotional champion of top series and movies on major streaming platforms, making it simpler for viewers to find what they want to watch and subscribe to leading streaming services. Clix is also a promotional venue for theatrically released feature films. Clix is an immersive, direct-to-consumer brand experience where viewers can watch, shop and earn Clix cash rewards redeemable for brand products or for charities they support.